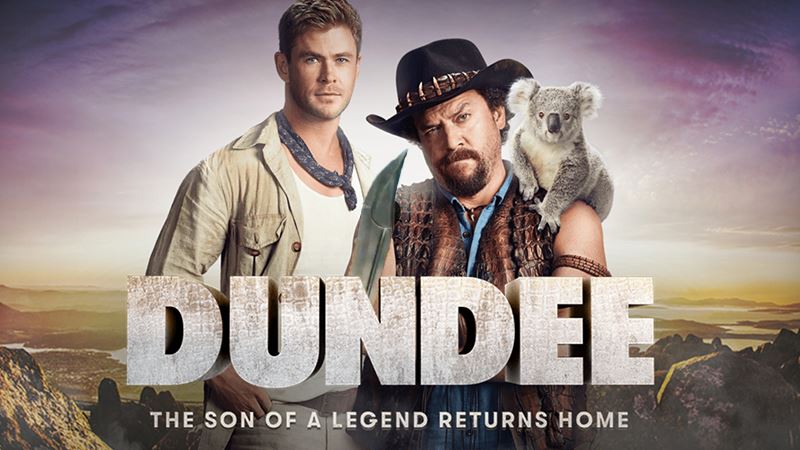 Queensland's Boodjamulla (Lawn Hill) National Park stars in Dundee movie The Queensland Outback is set to go global with Boodjamulla (Lawn Hill) National Park forming the backdrop to Tourism Australia's new advertising campaign, Dundee: The Son of a Legend Returns Home. More than 110 million people across the world watched the advertisement screened during the Super Bowl national football championships today and millions more have watched the campaign evolve on social media over the past few weeks. Staff at Adels Grove Camping Park adjacent to Boodjamulla National Park have been sworn to secrecy since November last year when Australian actor Chris Hemsworth and American actor Danny McBride were flown to the remote Far North Queensland property to film their scenes. "We had more than 90 film crew fly in and stay and both Chris and Danny stayed in one of our cabins," said Adels Grove owner Gary Murray. "They absolutely loved Boodjamulla National Park and were taken back by the natural beauty. "Even a typical Aussie bloke like Chris was surprised by what he found in his own Australian backyard." Mr Murray worked on location during the shoot and drove Chris Hemsworth to and from the set. "The last Dundee movies were set in the Northern Territory so when we were approached to host the shoot here, we were proud, surprised and excited," he said. "The Territory's not Outback. This is Outback." Located 250 kilometres north west of Mount lsa, Adels Grove is 10km from the spectacular Lawn Hill Gorge in Boodjamulla National Park and 50km from the world heritage-listed Riversleigh fossil fields. "The secret of Lawn Hill Gorge is well and truly out now — we are already getting an influx of people wanting to visit," Mr Murray said. Record-breaking social media audiences in the tens of millions have been engaging with the Crocodile Dundee-inspired campaign, according to digital experts. "Dundee and Lawn Hill are beating brands such as Pepsi and Budweiser on social media — you can't buy that kind of exposure for Queensland tourism," Mr Murray said. "We're hoping the ad goes so well that the original Dundee — Paul Hogan — can't resist the temptation to make another Dundee movie and shoots it here."
The dream team of Australian actors that feature in the advertising campaign include Liam Hemsworth, Russell Crowe, Margot Robbie, Hugh Jackman, Ruby Rose, Isla Fisher and Jessica Mauboy. For further information visit www.adelsgrove.com.au or call +61 47 48 55 02. Vision and photos are available at: https://www.dropbox.com/shicq7rb137d3so81v/AACwyrMgwAgTZxK5Sx1ZtcX1a?d1=0 Media contact: Fran Metcalf, Sequel PR, 07 3251 8131 or 0417627867
This message is only visible to admins.
Problem displaying Facebook posts.
Click to show error
Error: Server configuration issue